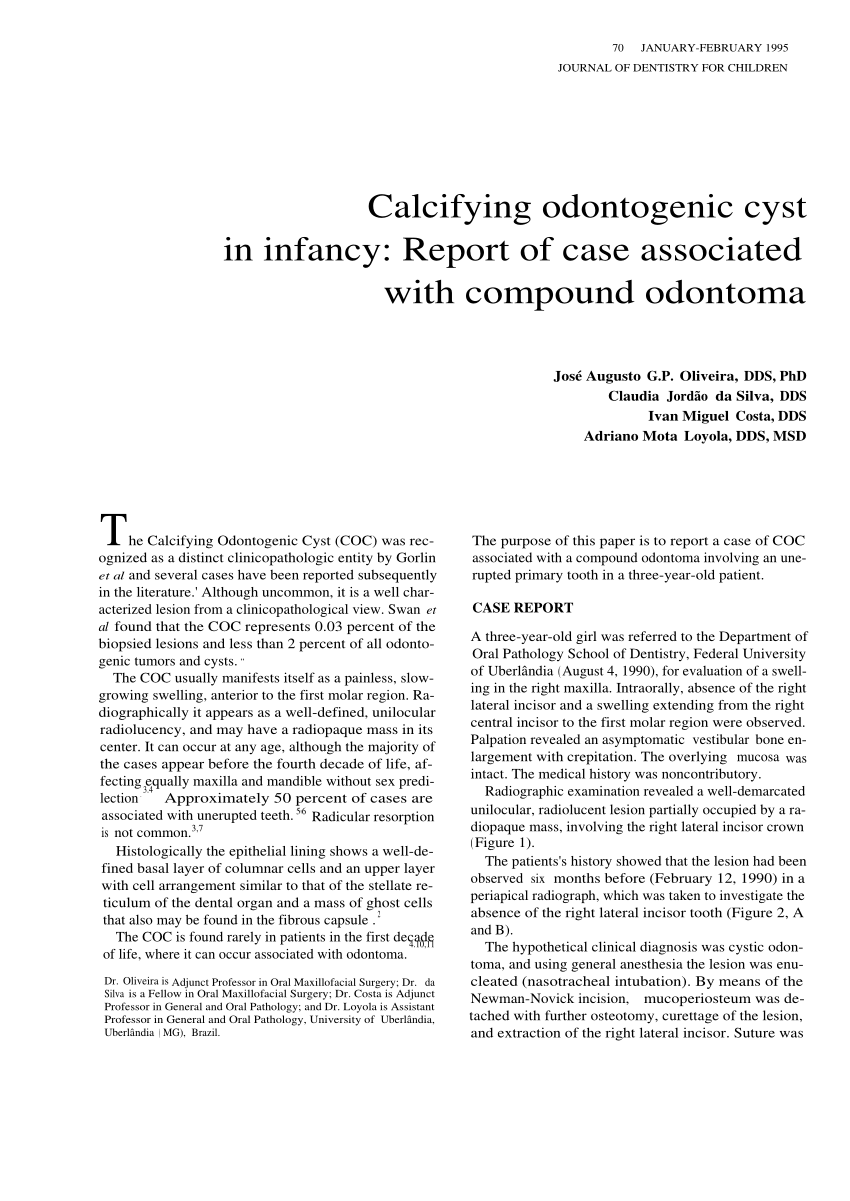 The major remaining gap in our current knowledge of adenomatoid odontogenic tumor AOT includes its recurrence potential [ 10 , 11 ]. Among more than 1, cases reported [ 11 ], there were only two publications of unequivocal AOT with recurrence [ 12 , 13 ]. Although the diagnostic nosologic problem remains, the term AAD is applied to a rare plexiform ameloblastoma with microscopic features of AOT including duct-like structures and dentinoid deposition [ 10 ].

As shown in the present and previous cases [ 15 ], the final diagnosis of AAD was made only in retrospect, after multiple recurrences. It is imperative to understand that AAD is actually an ameloblastoma with propensity for infiltration and recurrence. Clinical and pathologic correlation is important to avoid misdiagnosis. In brief, AAD contrasts with AOT by tending to occur in an older age group and to appear as an ill-defined, extrafollicular radiolucency and encapsulation is less apparent in AAD [ 14 — 16 ]. Good examples of this dilemma have occasionally been reported [ 17 — 19 ]. Microscopically, immunopositivity for calretinin may be a rationale for the ameloblastoma nature [ 9 , 20 ], as evident in our AAD.

It is our opinion that the basic histomorphology of the present tumor is similar, if not identical, to that of cystic SOT [ 21 , 22 ]. Whether or not an entity of cystic SOT is accepted, these cases appear to be a unique combination of large keratinizing cysts and solid squamous islands. It is likely that pure solid and solid-cystic tumors comprise a group of SOT. Of importance, the latter SOT should not lead to the diagnosis of non-neoplastic, mural SOT-like proliferations seen in several types of odontogenic cysts [ 1 , 21 ]. Microscopically there can be difficulty discriminating a biopsy of SOT, from pseudoepitheliomatous hyperplasia or a keratoacanthoma-like lesion [ 23 — 26 ]; however, such reactive lesions are present primarily as an extraosseous gingival condition in adolescence [ 24 — 26 ].

Our current case which presented as a radicular lesion provides some credence to the view that SOT may arise from the rests of Malassez [ 2 , 21 ]. Although rare, SOT in a pericoronal setting favors a follicular epithelial origin [ 27 — 30 ], with an embedded tooth totally encircled by a radiolucency in the reported adult cases [ 28 , 29 ]. The radiolucent area of pediatric SOT associated with an unerupted canine also shows the involvement of the roots of neighboring teeth [ 27 , 30 ]. It is best to consider that pericoronal SOT could still have origin from the rests of Malassez. We are unable to find any report on KCOT clinically indistinguishable from common pericoronitis. In our case 1, a semicircular area of rarefaction below a horizontally impacted third molar was the only radiographic sign and inflammation also obscured the specific histology of KCOT.

Because excised tissues were not submitted for microscopic examination, the underlying KCOT escaped early diagnosis until the lesion showed a destructive clinical course. Given that microscopic appearance of KCOT, be cystic or solid, is pathognomonic [ 1 , 4 , 31 , 32 ], the original diagnosis of SOT in our case 2 is an avoidable error. As shown, Bcl-2 immunoexpression may serve as a clue to the KCOT phenotype of intraosseous squamous epithelial lesions [ 4 ]. Very important from a practical view is the distinction between SOT and solid KCOT, because of differences in clinical behavior [ 33 ].

Only a few cases have been published [ 31 , 32 ], thus precluding any meaningful conclusion that a solid variant of KCOT exhibits a greater potential for aggressive growth and recurrence compared with its classic cystic form. It is interesting to note that microscopic similarities, including overlap with KCOT, have also been observed in keratoameloblastomas [ 34 ]. To date, the issue of whether keratoameloblastoma with KCOT-like features is truly an ameloblastoma or whether it represents a histologic variant of solid KCOT remains debatable [ 31 , 34 ]. There have been reports of PIOSCC camouflaged as benign reactive conditions associated with a horizontally impacted lower third molar [ 35 — 38 ]. These incipient tumors were mostly interpreted as a carcinoma ex dentigerous cyst [ 36 , 38 ], but radiolucency associated with the root part of involved tooth was the principal finding in some PIOSCC including our case 1 [ 35 , 37 ].

It is thus probable that the rests of Malassez may be an additional histogenetic source [ 37 ]. Nevertheless, careful consideration should be given to the sulcular epithelial origin, because of the soft-tissue impaction of the carcinoma-associated tooth [ 37 , 38 ]. There are two alternatives to explain the origin of our case 2. The first possibility is that clear cell carcinoma of the minor salivary gland invaded the periradicular bone and transformed into dentinoid-forming basaloid tumor in a central location. The second possibility is that primary intraosseous odontogenic carcinoma perforated the lingual cortical plate and grew in the gingiva.

Based on the clinical and pathologic correlation, the second alternative is considered the most likely. Our tumor lacks mature squamous phenotype and shares features with the recently described sclerosing odontogenic carcinoma [ 39 ]. Significant amounts of dentinoid deposition are exceptionally rare in PIOSCC [ 40 , 41 ]; however, this is a fortuitous microscopic finding without any diagnostic or prognostic significance. In summary, clinical impressions and radiographic appearance are indispensable for the surgical pathologists who diagnose challenging jawbone lesions.

Although a small number of heterogeneous cases, the results of this pathology-oriented study will, in turn, aid the head and neck surgeons in the clinical diagnosis for some of commonly misinterpreted odontogenic entities. Slootweg PJ. Lesions of the jaws. Hamartomatous proliferations of odontogenic epithelium within the jaws: a potential histogenetic source of intraosseous epithelial odontogenic tumors. J Oral Pathol Med. Unsuspected small ameloblastoma in the alveolar bone: a collaborative study of 14 cases with discussion of their cellular sources. Rare peripheral odontogenic tumors: report of 5 cases and comprehensive review of the literature. PubMed Article Google Scholar. Granular cell odontogenic cyst: a unicytic ameloblastoma with late recurrence as follicular ameloblastoma.